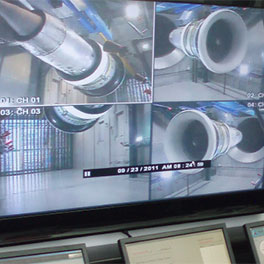 Atec has listened to the feedback of users and OEMs. ADAQ™ has been simplified and streamlined for operators. FADECs and other engine controls are properly interfaced. Startup has been shortened, and primary run screens have been uncrowded. More complex data gathering, trending, and calculations are running in the background, until the operator clicks on it for display, report generation or data transmission.

ADAQ™ has been designed to be quickly and easily reconfigured for all engine types with the capability to accommodate installations in new test facilities or upgrades to antiquated test cells. Because process reliability is a key component of any test system, ADAQ™ includes displays of all critical test data, engine and facility status, multi-level alarming, custom report generation and network connectivity.  The entire data acquisition and control system is housed in the control console. The system is assembled, verified, and tested at Atec prior to shipment to the customer’s facility. This reduces the amount of test cell down time, minimizing the impact on the production schedule.